Renaissance style The White Tower is the highest landmark of the city (72 meters) offering visitors a unique view of not only Hradec Králové, but also the remote peaks of The Krkonoše Mountains and The Orlické Mountains.

Virtual tour of the White Tower 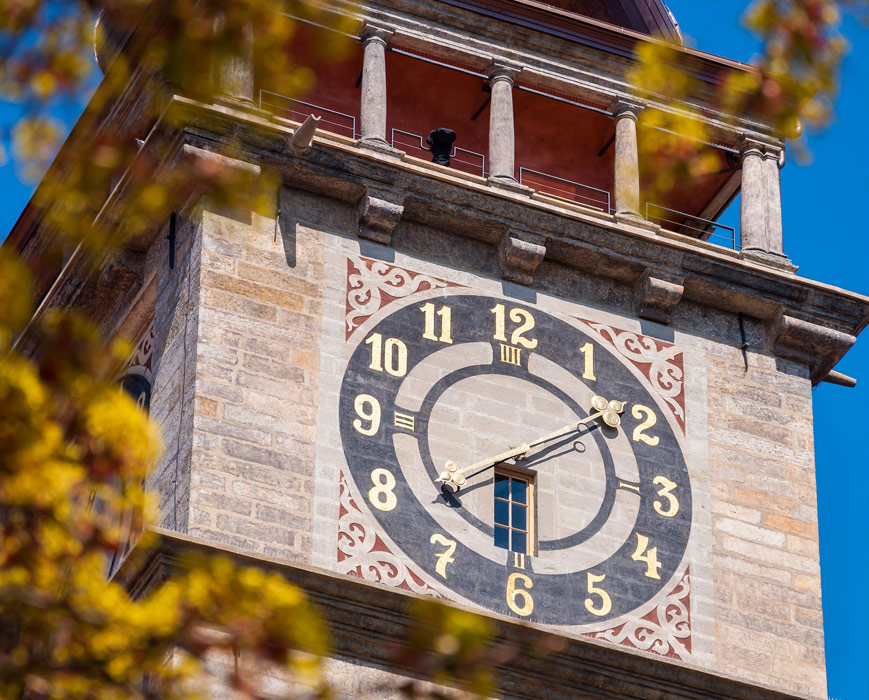 The name of the tower comes from the bright white colour of HoÅice sandstone from which it is built. It houses Augustin, the third largest bell in the Czech Republic, the original tower clock machine by Josef BoÅūek and a unique glass model of the tower. A thorough reconstruction carried out by the City of Hradec Králové in 2014 and 2015 allowed the installation of a modern audio-visual technology that offers countless possibilities for amusement and education. 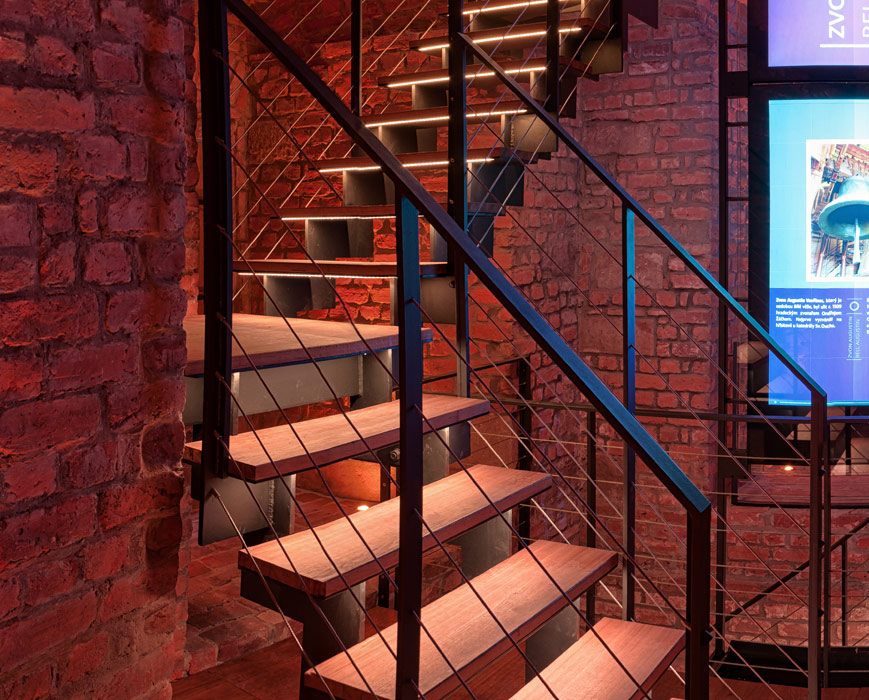 The White Tower reconstruction project is a part of the Integrated plan of the development of the city of Hradec Králové “City Centre = the centre point of city growth and development”, 2.1.3 Protection and renewal of monuments and historical buildings. This project is co-funded from the European Fund for Regional Development within the framework of the Regional operational programme NUTS II North-East, priority axis 2.1 Development of regional centres. 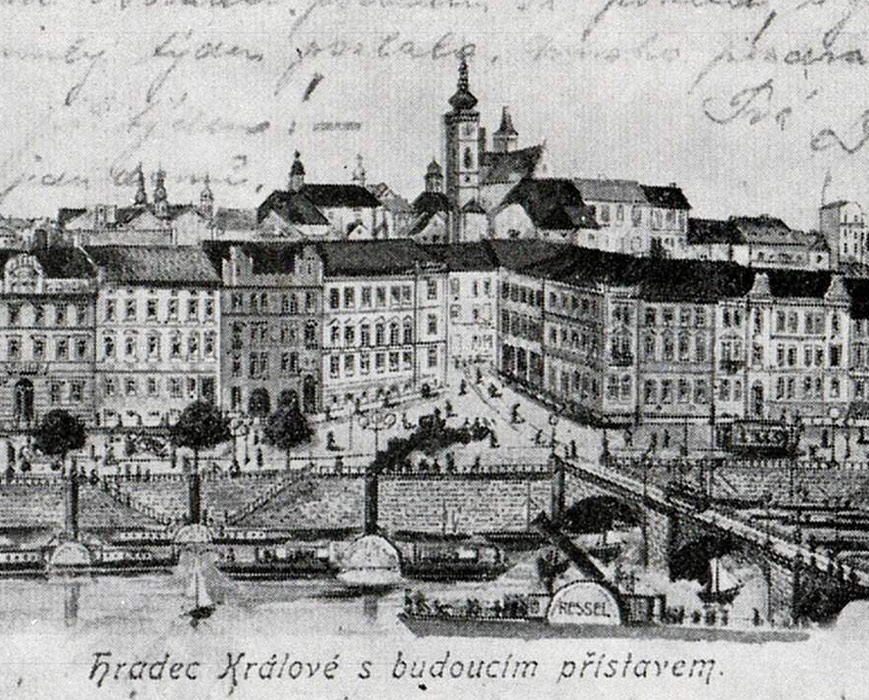 Construction of The White Tower started in the middle of the western side of the Great Square in Hradec Králové on July 7th 1574 during the reign of the Primate Martin Cejp of Peclinovce thanks to charitable gifts donated by the citizens of the city. Over the period six years, a 48 meters tall tower with the footprint of 10x10 meters made of HoÅice sandstone grew up at the square. The construction was completed by installation of the roof that changed both shape and colour a number of times over the years. It used to shine thanks to its copper cladding, but it also used to be of white-grey colour or green. Naturally, each change of the roof colour was perceived very negatively by the general public. The very last change of roof shape added 20 more meters of height to the tower back in 1840. 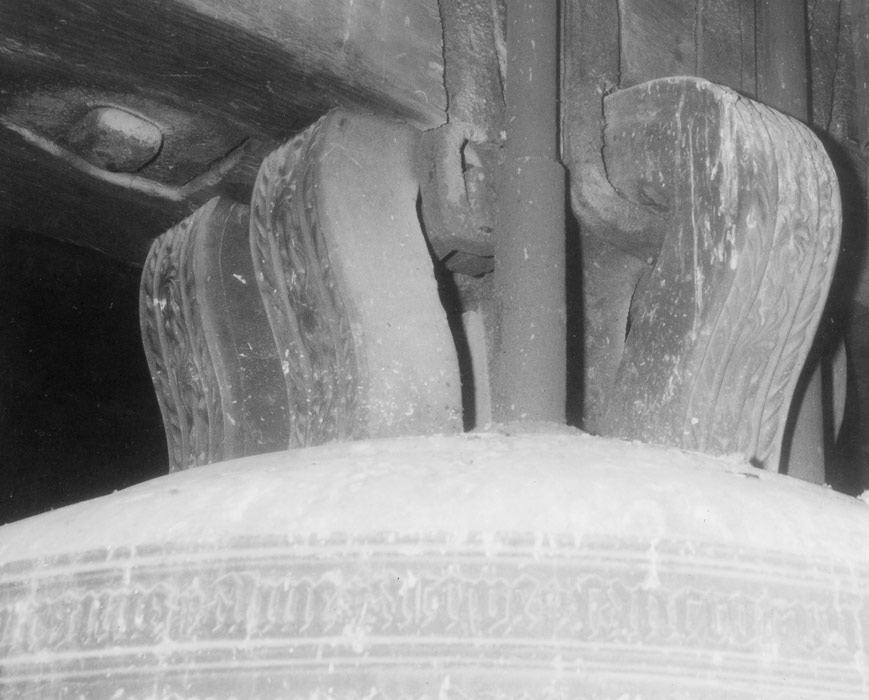 The White Tower in Hradec Králové houses the third heaviest and largest bell in the Czech Republic. It´s bottom diameter is 206 centimetres, the approximate weigh is 8 000 kilograms and the tone is C1. The bell was first sounded back in 1509. At that time the bell was located in a wooden bell tower, because the city simply did not have a tower that would support the enormous weight of the bell. The bell moved to The White Tower some 72 years later, in 1581. Municipal bell used to be sounded on the occasion of commencement or completion of annual markets, in case of fire risk, to convene the city council or at various other festive occasions or dangerous moments in the history of the city of Hradec Králové. However, the bell was not sounded on regular basis. It has been devoted to St. Augustine since 1705. Because the tower got hit by a lightning the municipal council started to investigate why this has happened. The surprising conclusion was that the bell was most likely not blessed. Following the request of the city council bishop Tobias Jan Becker finally blessed the bell in 1705. The bell clapper cracked in 1850 and 1903. 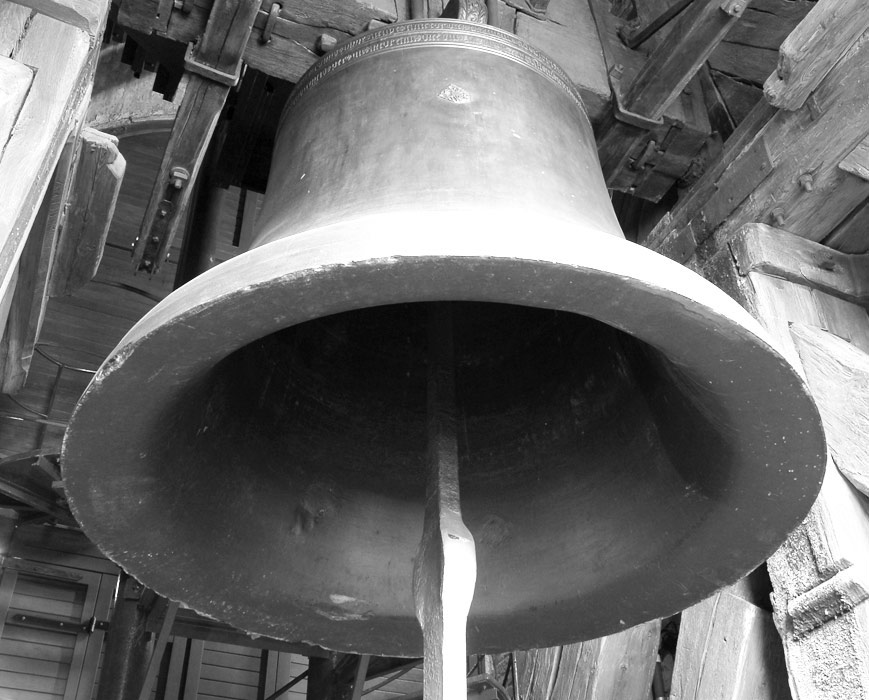 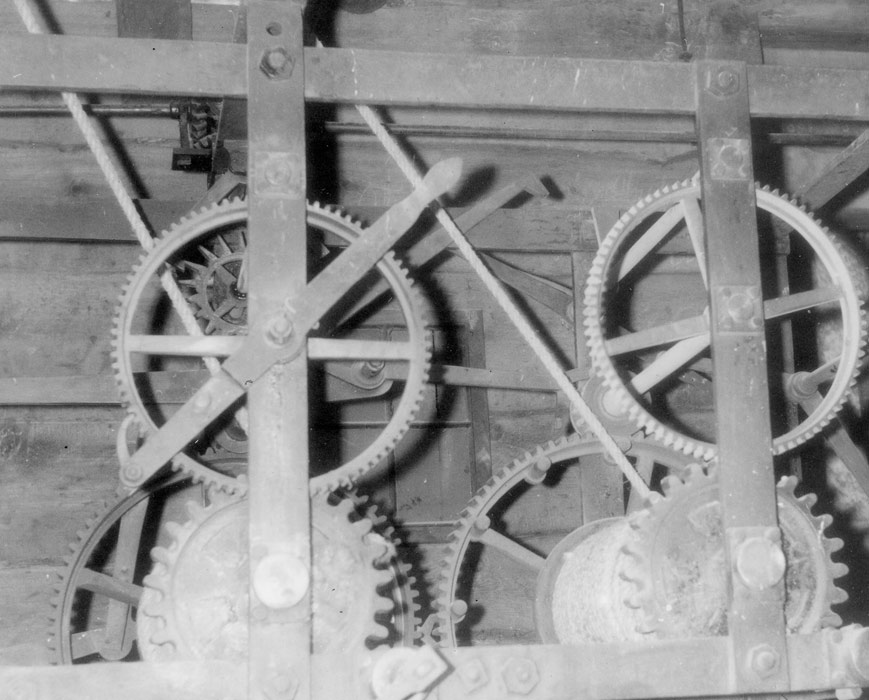 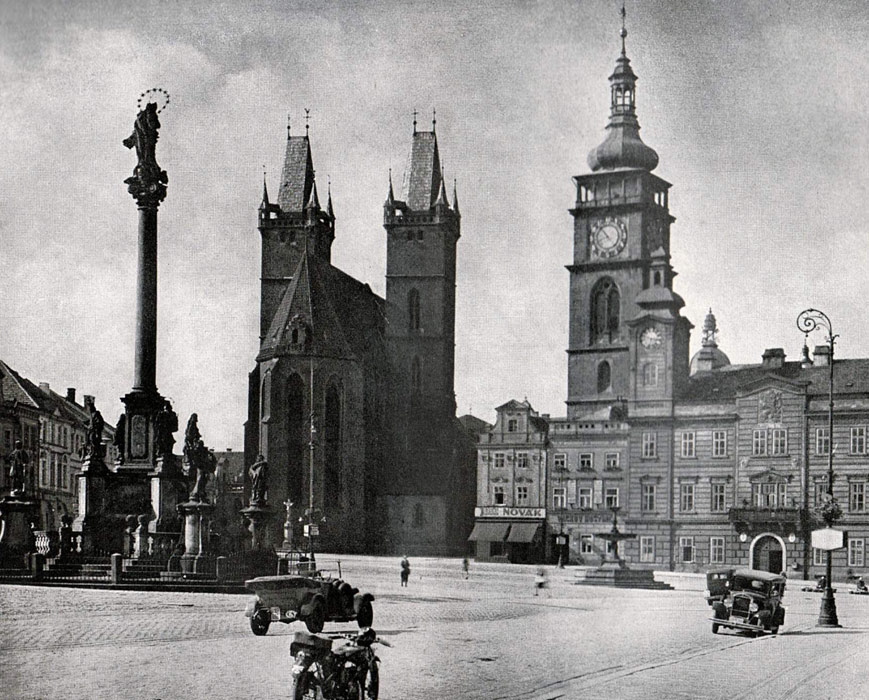 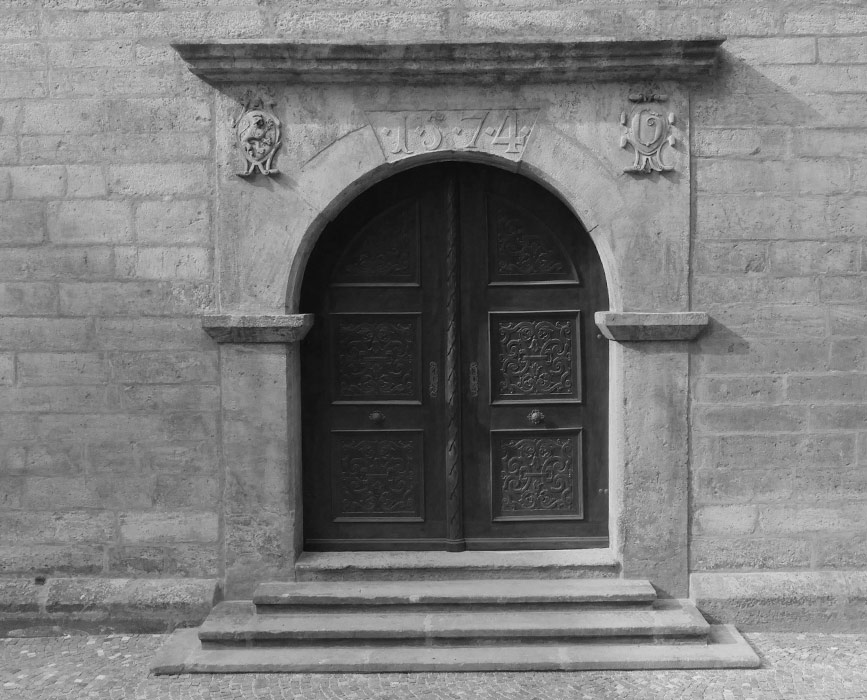 Back in 1936 the deputy major and legal counsel L. DomeÄka wrote in his remarks that the Augustin bell is recorded in the inventory lists as property of The Cathedral of the Holy Spirit and that already the Jesuit chronicler František Švenda (1741 – 1822) referred to the Augustin bell as The White Tower´s jewel. The next White Tower repair was carried in 1989 – 1991 and the very last one in 2013 – 2015.
A Latin motto of the Holy Roman Emperor Maxmillian II is inscribed over the renaissance portal of The White Tower. It reads: „Deus providebit, vigilandum tamen“. Apart from the Czech translation “The Lord is far-sighted hence we have to keep vigilant” there are also other translations mentioned in other literature, such as “We keep watching out despite of all Lord´s foresight.”

The White Tower is opened daily including weekends and holidays, except New Year´s Day and Christmas Eve. Last visit 60 minutes before closing time. Time of the last visit may be extended depending on the number of waiting visitors.

Night tours are held usually every first Saturday of each calendar month from 8:00 PM until
midnight. Last visit 60 minutes before closing time.

The number of visitors of The White Tower is limited to 30 at a time for safety reasons. This limitation is also applicable to organised group tours.

SUNRISE ON THE WHITE TOWER

Admission fee: 150 CZK
A unique opportunity to experience the sunrise at the gallery of The White Tower will allow you to enjoy the once-in-a-lifetime atmosphere of the awakening city: 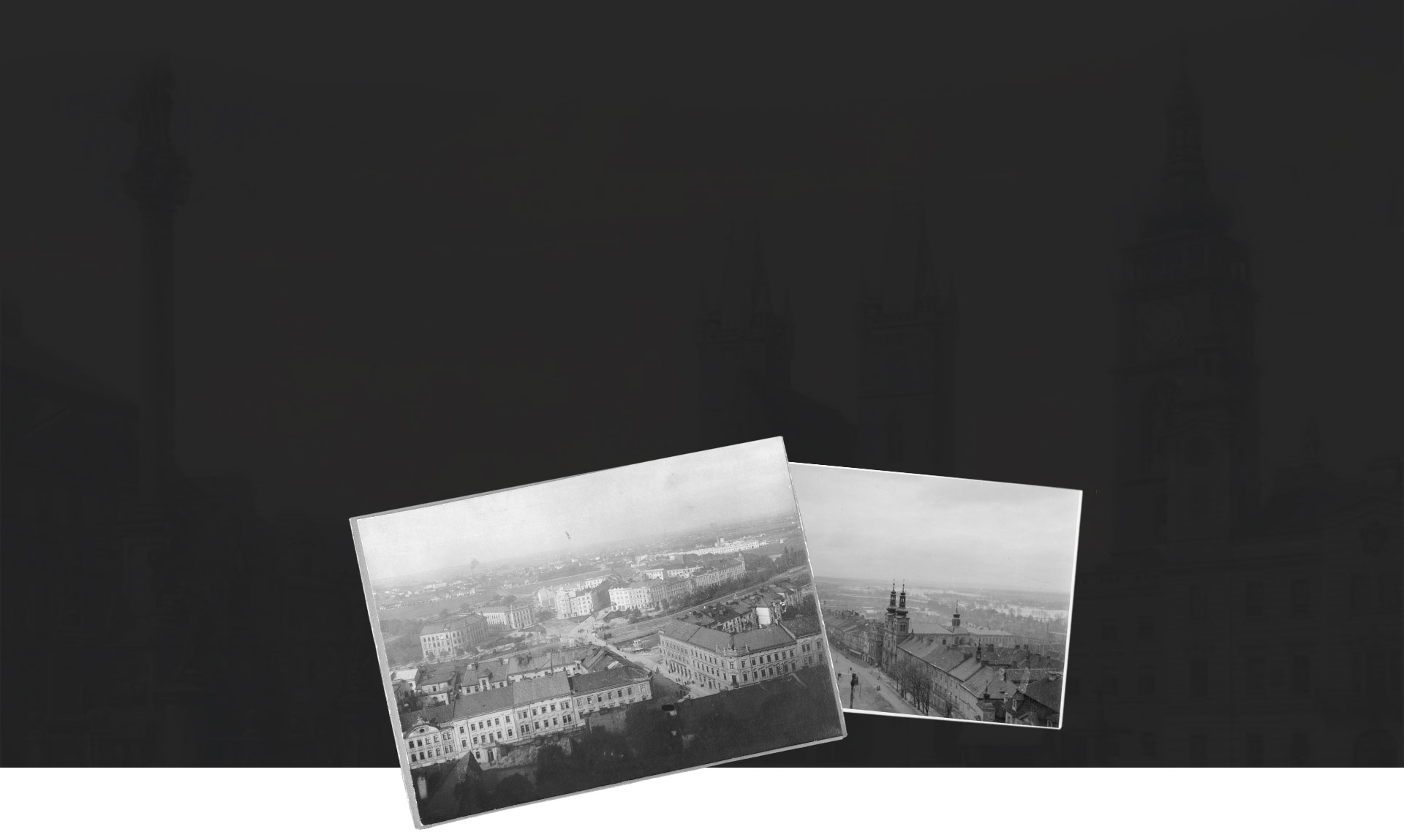 What will you see

When you ascend the gallery of The White Tower, you can see the unique glass model of the tower, over 500 year old Augustin bell and the original clockwork constructed by Josef BoÅūek in 1829.

The White Tower glass model, which originated in the Kolektiv Ateliers in Nový Bor, is manufactured using a unique technique of glued blocks made out of extra pure flat glass. Glued blocks were machine-sanded into precise dimensions and then hand-polished in order to achieve the desired optical effect. Glass blocks were also complemented by a whole range of hand-sanded and blown shapes. Matte and shiny surfaces were combined in the entire model in order to achieve better visual effect. This allows to light up internal parts of the model while using external lighting sources. The model consists of more than 500 pieces of glass and it weighs approximately 1000 kilograms. The hand-produced parts of the model took more than 1500 hours to make. 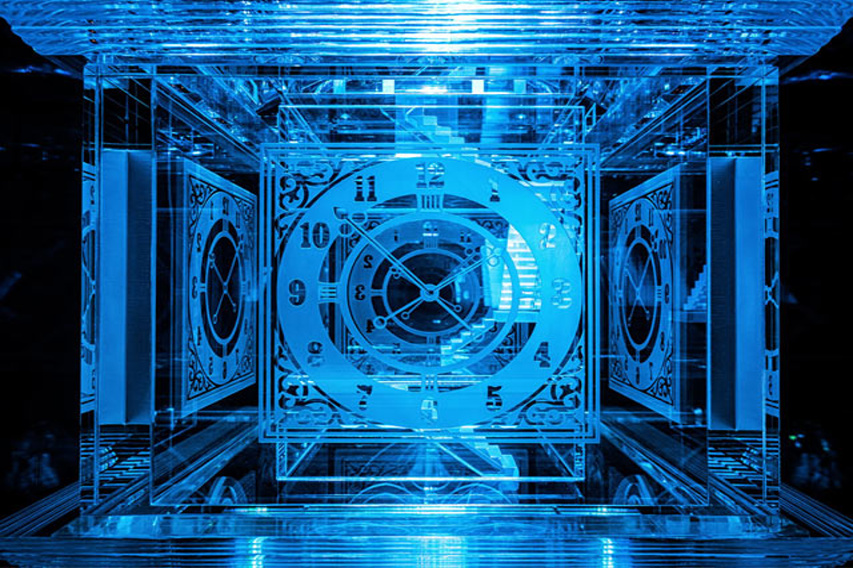 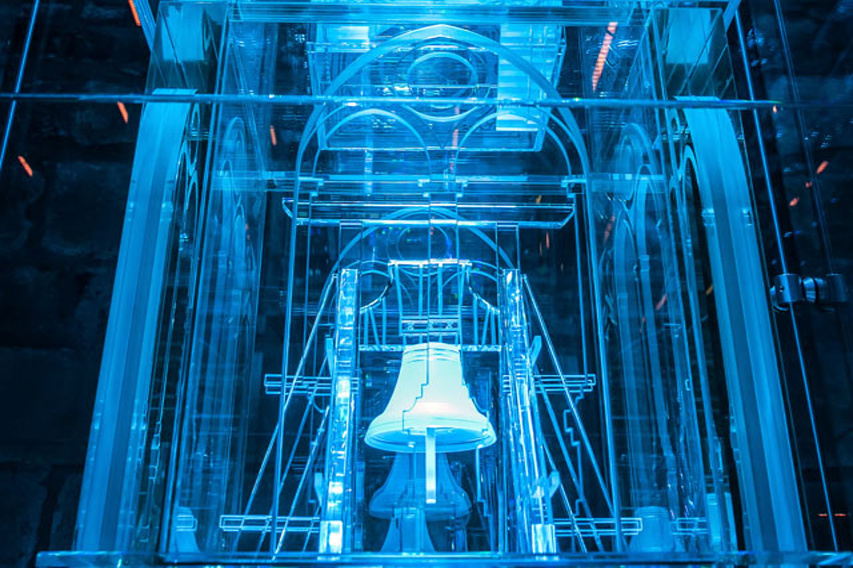 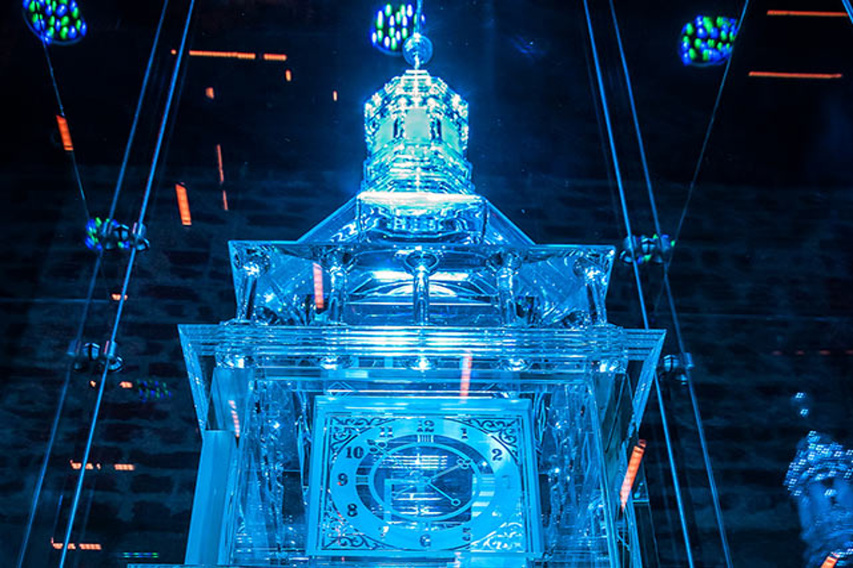 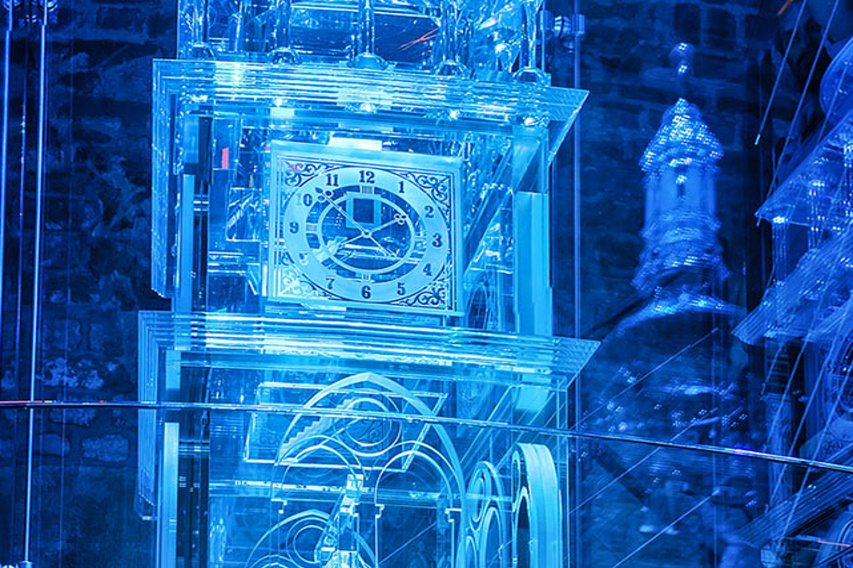 In May, 1581, an imposing, 169 cm tall and 206 cm wide Augustin bell, cast already in 1509 by the bellmaker OndÅej Å―áÄek from Hradec Králové and paid by the city inhabitants, was officially hung on the 4th floor of The White Tower. Only the Zikmund bell from the Saint Vitus Cathedral in Prague exceeds him in size. 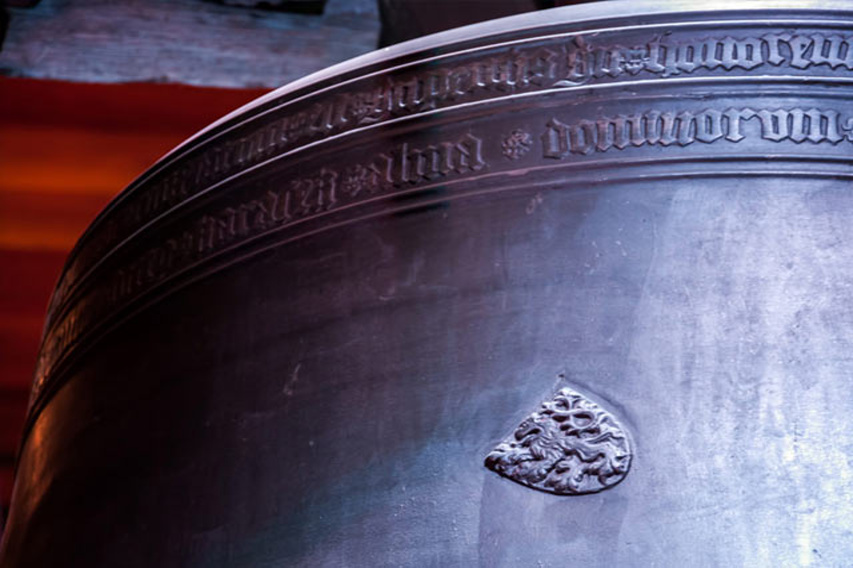 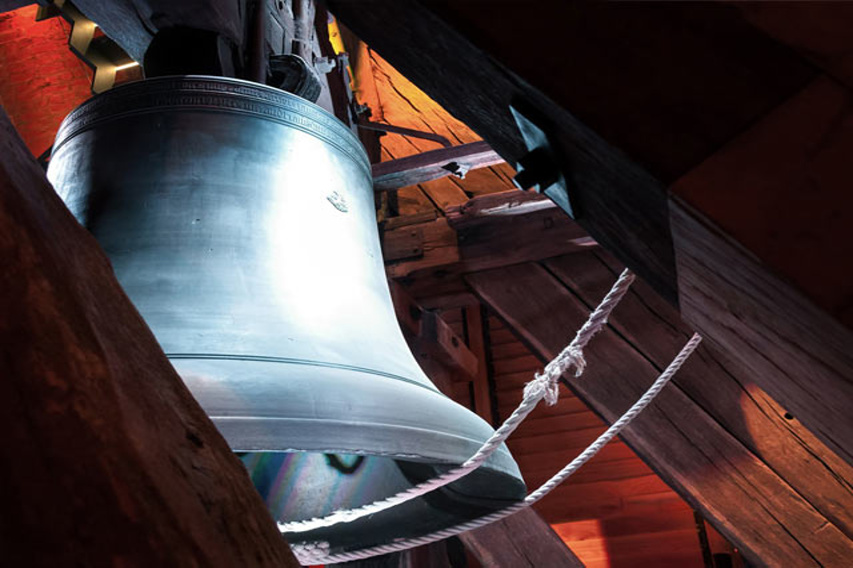 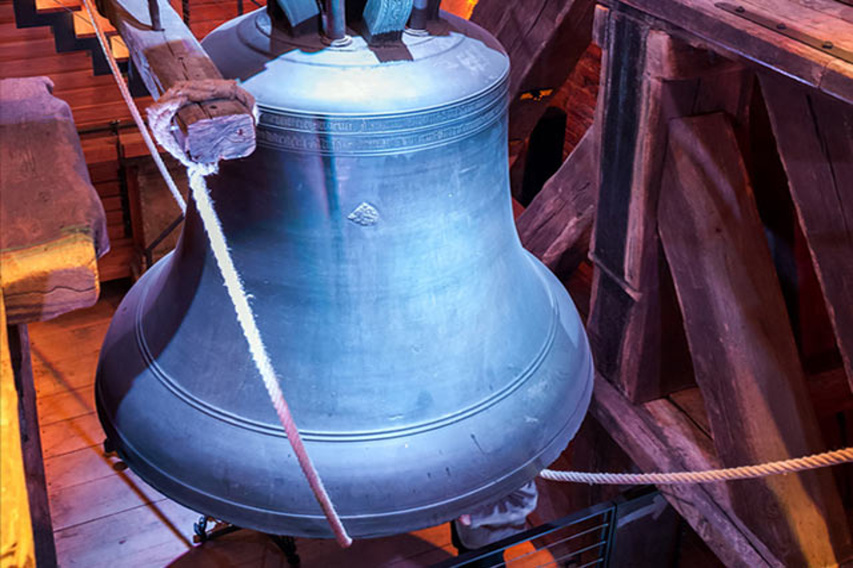 In 1829, the old VavÅinec´s clockwork served to its time and was replaced by the the new one constructed by the Prague mechanic and watchmaker Josef BoÅūek. In the end of 19th century the clockwork was considerably delayed and in 1923 it was even stopped by lightning. This clockwork was renovated by The Museum of Eastern Bohemia in Hradec Králové and nowadays it is the part of the exposition on The White Tower. 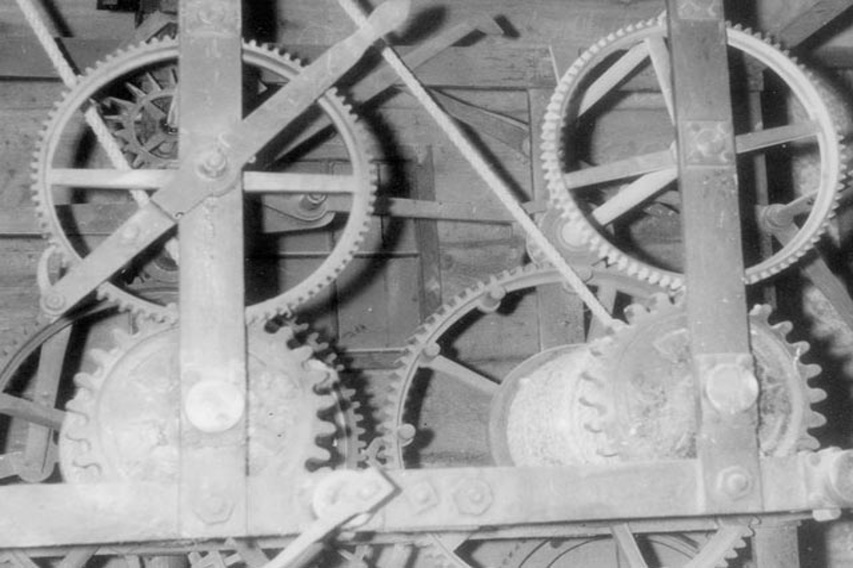 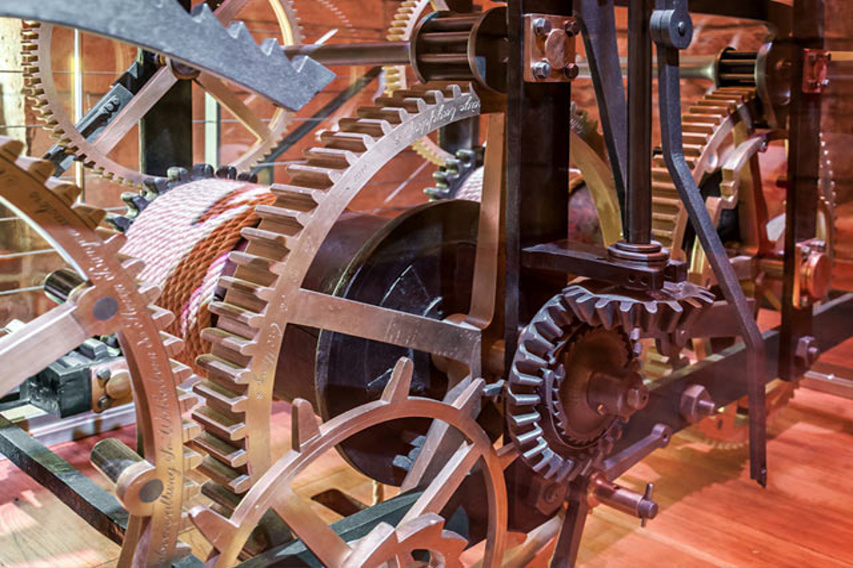 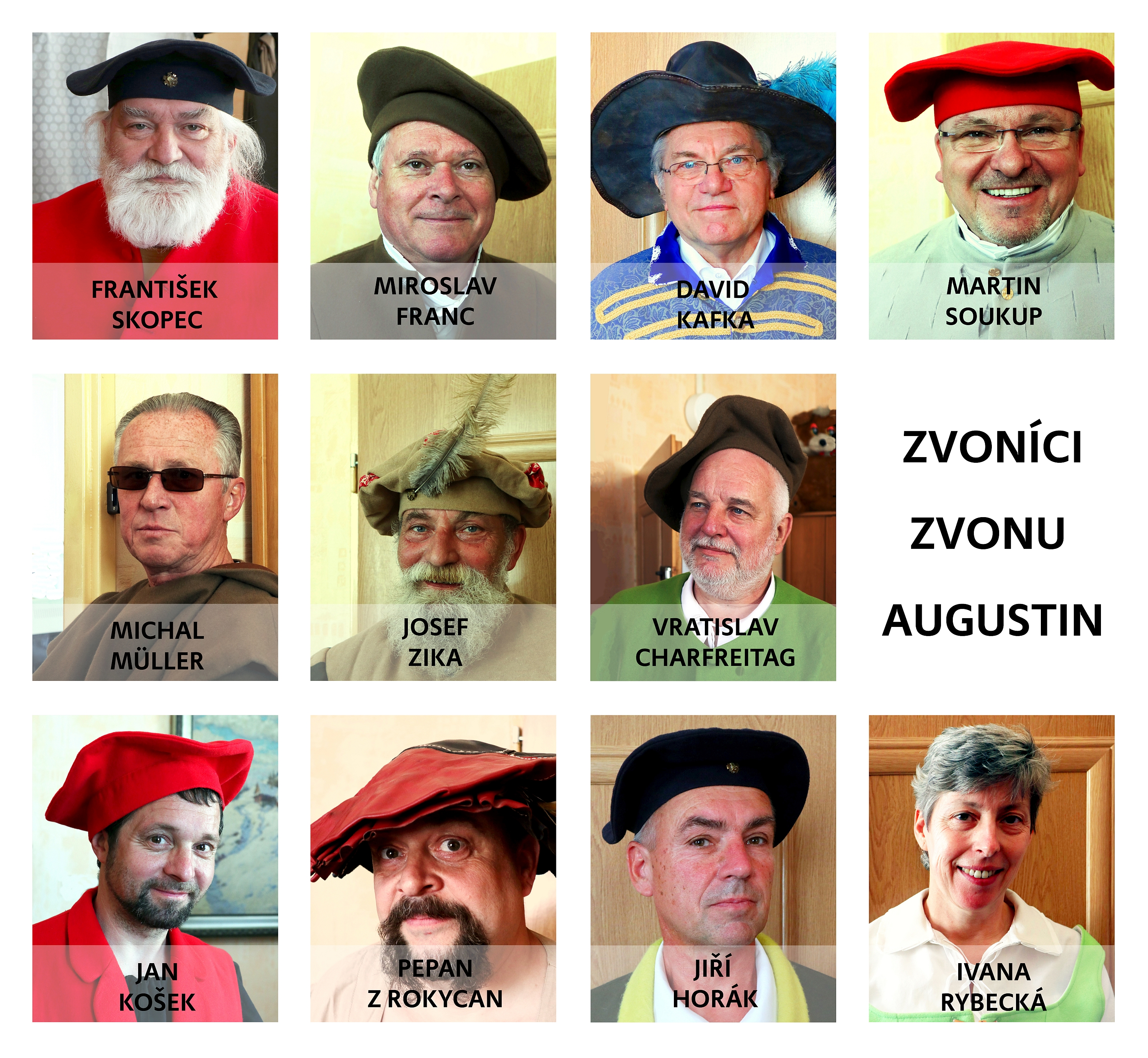 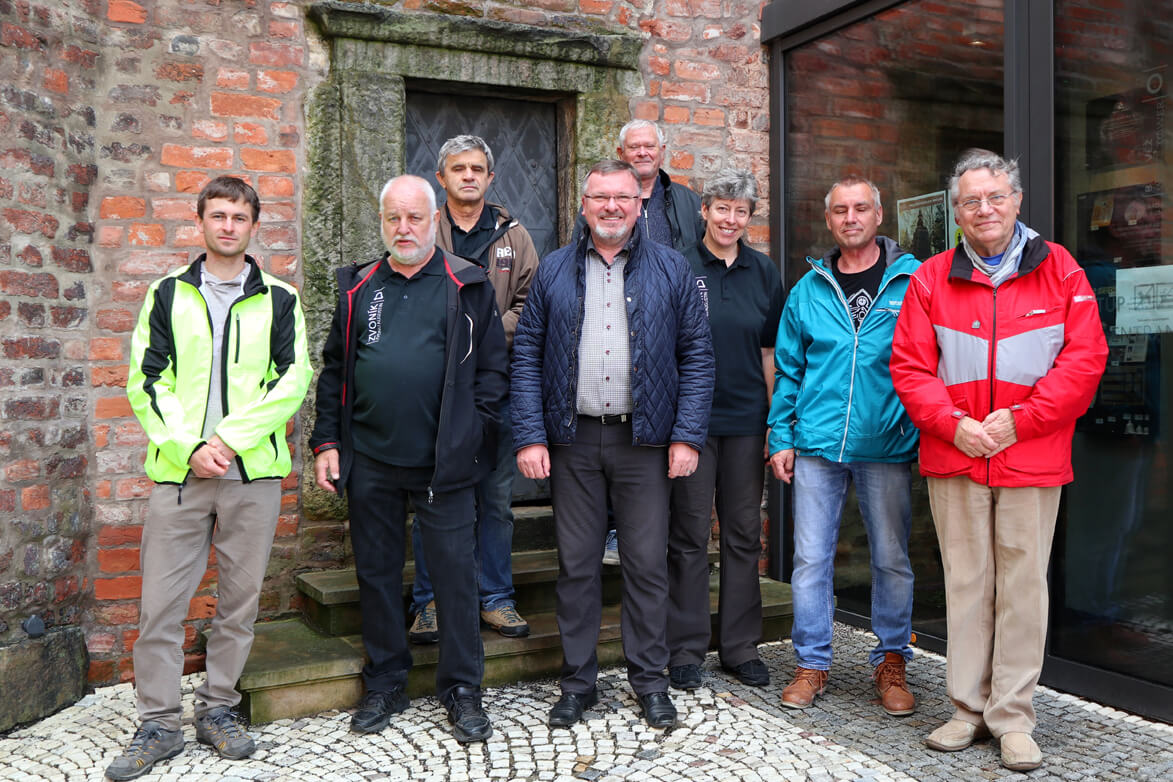 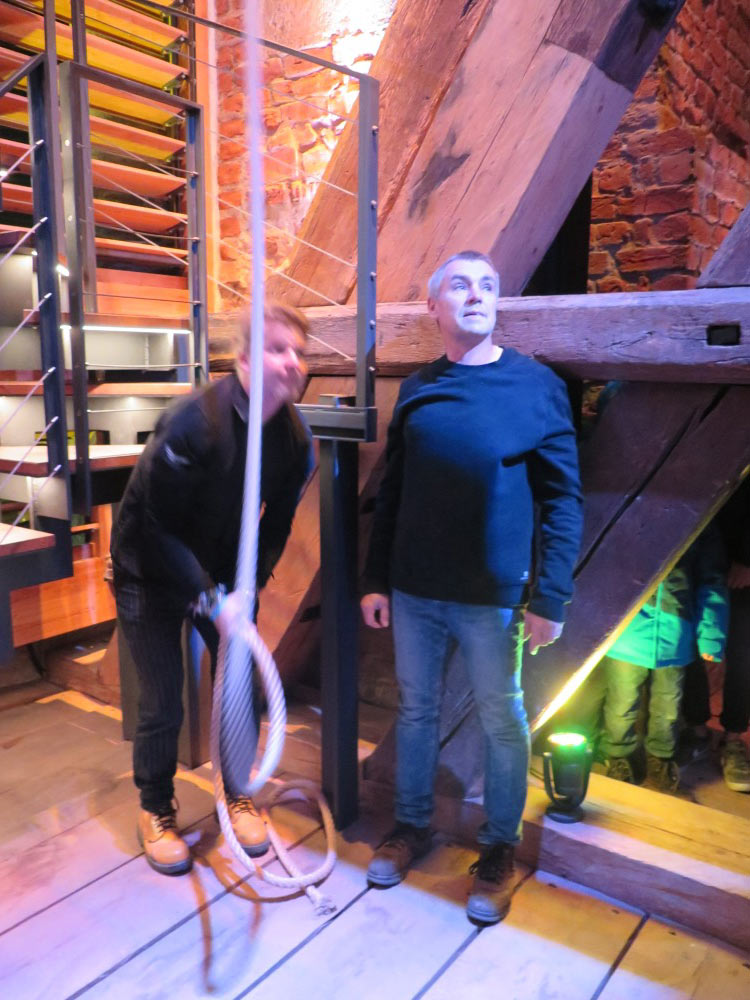